What Do Chet Holmes And Terri Levine Have In Common? 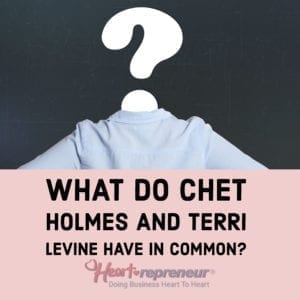 After doing life coaching for many years and career coaching as well, I realized that my true passion was helping business owners create successful businesses as I had done for myself.  I shifted my coaching and consulting business to help companies of all sizes with business growth and sales and marketing.  It was at that time that I was introduced to Chet Holmes and the ultimate sales machine. We engaged in a lengthy conversation and he shared his ideas with me about creating a core story and a stadium pitch and I realized my business growth ideas were very aligned and we shared many similar strategies.

Soon after, Chet came to me and told me he wanted to have a stable of business coaches who were already trained as top coaches that he could teach his ultimate sales system to and then give some of his clients to so that they could be working with companies and people to create even more business success.  The idea totally resonated with me.

And So We Begin … 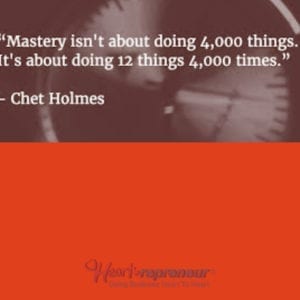 I owned a coach training school and we were training and graduating and certifying top coaches worldwide and being able to connect them with Chet Holmes and have them trained in his sales methods so they could work with his clients was a grand idea.  My graduates resonated with this idea and soon many of my graduates were working with Chet and learning his sales machine process.  My certified graduates who were the right fit were grateful for the amount of time this short-cut saved them as very quickly they had a full book of clients and they did not have to prospect or engage in any marketing.

Some of these graduates went on to earn six figures very quickly in their own businesses as well following my ideas along with the information and tools provided by Chet. 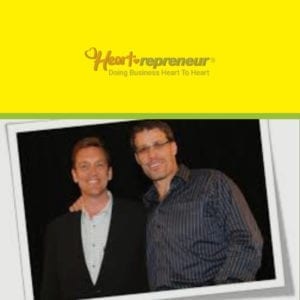 Chet merged his coaching company with Tony Robbins and that appeared to be the ultimate match. I was still providing coaches to their company and engaged with my graduates working with them who were thrilled to have not only top coaching skills, they now had access to top clients.

When Chet became ill the graduates I had sent to him over the years already had deeply embraced his teaching. They could now create their own client generating machine and had a clear understanding of how to market based on actual market data.  They knew how to engage with a buyer and how to use many tactics including things most people had not been using, like direct mail.

Sadly, Chet passed and things changed with his company.  The good news is that the students who had graduated and been certified by my coaching school had superior coaching skills and had the benefit of working with Chet. They now had this huge arsenal of ideas and strategies that actually worked. They understood not only how to attract ideal prospective client family members with ease, they weren’t afraid to do so.

They shifted away from being a coach for another company and started growing their own businesses. Many asked me to mentor them and enrolled in some of my consulting programs to learn how they could imitate my success and take the information they had learned from Chet and combine it with my knowledge to quickly grow their own six-figure businesses. These students had a deep desire to learn and had already shown up as top coaches for his company, so I was thrilled to embrace them and nurture them and take them under my wing.

I worked with these awesome coaches on their core stories, stadium pitches and to refine their sales and marketing and business growth coaching techniques.  I challenged them to grow and to expand and to add to what they had already been doing as a coach working on someone else’s team to create their own processes and success systems.

I then helped her to create an automated webinar of super high value that would be transformational to the business owners who watched the webinar. At the conclusion of the webinar, they could apply for the opportunity to become one of her clients. I showed her how to do Facebook Live’s correctly to get a lot of eyeballs, without ads.  She went from a few hundred views at first to over 2,000 views in a few days.

Using the tools she had like a stadium pitch, Core Unique Positioning Statement, core story, Consumer Awareness Guide, direct mail, social media marketing, email marketing and more, we selected 3 of these that she most enjoyed being her marketing focus. Instead of doing what most coaches and consultants do which is scattered marketing we picked strategies that are proven to work and that yield results when implemented consistently and correctly.

Her business took off. She was making six figures within a little under 9 months. She began to realize she could turn her business into a million dollar business and she wanted to be able to provide for her children in that way. She wanted to see them go to top colleges, have cars and dream vacations and knew that she could do that.

We began a growth plan to move from six to seven figures without her having to work a lot of hours as being with her children was super important to her and having a balanced life for fun and vacations and family time was her top priority.

Together we looked at all the tasks she was doing in her business. I showed her the distinction between building a business, which most coaches and consultants build, vs. building a company with a team of people working with her allowing her to truly step into the CEO seat with her focus being a visionary for her company.  At first, it was a struggle for her to let go of tasks and especially to allow other members of a team to directly coach and consult with the client family members. She feared their businesses would not grow and that the results she guaranteed would not happen.

How did I get her to shift?  It was easy. I reminded her that when she was a coach with Chet he trusted her to do the coaching. However, he didn’t just hand over his prospective client family members and later his family members to her. He brought her on as a coach on his team because she was referred by me and was a graduate of my coach training school and certified in my coaching processes. He knew she was highly competent. Then, he trained her in his own proprietary sales and marketing and business growth processes. As she grew and he had more faith in her he gave her higher level client family members and those who had more complex business issues.  He trusted her to get the results the client family members were seeking.

She thanked me for reminding her how the entire process had worked and realized she could easily imitate this in the company she was building and decided she wanted to build a company.  I recall a conversation with her explaining to her that a business owner did the craft of the business and no one else could do that craft. If the owner could not work with a client family member or do the work, income didn’t flow in.  The owner could not go on vacations or money would stop.  If they got ill and could not work, money would not come in.  They weren’t building a business with an exit strategy and could not sell their business or leave their business to their children and were not creating a legacy. They had simply worked themselves into a job.

On the other hand, the owner of a company had people doing tasks and the business did not depend on them.  They could go lay on a beach in Tahiti if they choose and money would still roll in while freedom was still rolling out.  If they wanted to sell their business or transfer their business to their family later, they had a sellable asset and a legacy to pass forward.  She really wanted to build a company.

I am thrilled to report that she has gone on, in two short years time, to build a multi-million dollar company where she is the business strategist, visionary and true leader of an amazing team of business coaches and consultants. She has spent time and energy creating business processes and systems and countless hours training her coaches and consultants in her proprietary processes.

She now works an average of 20 hours a week with her team and she sets the business strategy and her team members implement the sales and marketing.  She herself works with a handful of the highest level client family members who are paying top dollar to work directly with her. All other client family members are served by her team of coaches and consultants.  Her business is positioned to sell if she chooses to.

Currently, her plans are to keep growing the business and she wants to double the size because the work they are doing and the businesses they are changing is very important to her and she wants to serve more business owners make a lot more profits like she has. She loves her business and her life and has gone on 4- 2 week long vacations with her daughters and been able to get them private tutoring in things they love to do. One is an expert gymnast and the other an expert musician.

Both of her daughters can select whatever colleges they might want to attend without any financial aid.  She has a retirement fund for herself and has moved her family into their dream home and also purchased a vacation home for their summers.  She plans to buy each of her daughters a car when they are ready to drive.  She no longer has any financial concerns.

She has come a long way!  She began working under Chet Holme’s wing and is grateful to me for making that connection. She uses the coach training skills she received from my school as well as the methods she learned from Chet. She has gone from being a coach for someone else’s company to being a business owner with her own business to be the CEO of her own company.

She has a leveraged asset she can sell at any time and work only 20 hours a week she is making millions of dollars while making a real difference not only for her client family members, she employs a stable of coaches and consultants and administrative help.  She is making a difference in so many ways.

I am honored to have played a role on her journey and am grateful for my connection with Chet. Because I said “yes” when Chet offered to unite my student graduates with his programs, so many coaches have gone on to make serious livings being a business coach and therefore have been able to grow businesses worldwide.  I am grateful that I listened to my gut and felt oscillation with his methods and said, “let’s do this!”.  I truly do believe that when you are open to opportunities and have the greater good in mind you can make a bigger difference.  His legacy lives on with my student graduates. They use his methods (and I do as well) and we think about him often and sing his praises regularly.

Are you ready to create six and seven figures owning a company?  Do you want to make a big impact on client family members and leave a legacy?  I’m happy to help you. First, watch this webinar then reach out for a chat (not a sales pitch) after the webinar.  Right now, join our Heart-repreneur® community with tons of free tools and resources.