It just seems to keep on growing. What keeps this out of control fire fueled? It seems that these horrible crimes are occurring with increasing frequency.

Note: I may refer to different countries or groups, BUT I am in no way criticizing or being judgemental. They are used only as a point of reference. I have no prejudices against any ethnicity, color, sexuality, heritage, country or whatever label you use.
Also, I will be making some, possibly, controversial statements. These are my personal views and perhaps can be the basis for calm discussion without vitriol and hate.
The madness I’m referring to, you probably deduced, is the mass shootings…murders, in truth. I asked two questions at the outset. The first question.. will this madness ever stop.. I can answer. Yes is the answer. 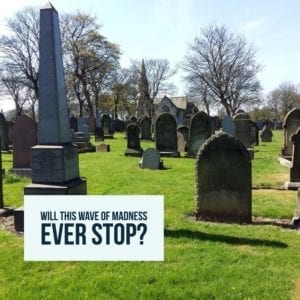 How can I say that?
I am no fortune teller or a seer of future events.
Yes, these events will stop when more people realize that human life on the planet cannot be sustained if this continues. It will stop when more understand that the answer is not more violence or militarization as the response.
The two greatest forces in the universe are the human mind, and love. Larger numbers need to see that logic dictates another approach must be employed; an approach that means various groups, governments, leaders sit down and first throw out all they have been doing. It doesn’t work! It will entail serious, difficult discussion…without rancor. That’s the second greatest power at work…the mind.
The greatest power is love. Masses of individuals can effect change by sharing love with all other people. Get rid of the divisive labels. All are One. One is all. We are all brothers and sisters, so why don’t we all act that way?
But some say DNA says we are different and others are inferior.
That is so wrong, wrong, wrong. Our DNA, our genetics, can tell us that we may have certain DNA characteristics that have a similar pattern as many people from a certain area. What does that prove concerning our status? Nothing. In our shrinking world, with the ease of international travel, people are also having relationships with ones of differing cultures and ethnic backgrounds.
Here is a simple proof that all humankind is one. A man from Nigeria can be the donor of a kidney going to a Japanese woman…a Turkish man can have a Peruvian heart transplanted into his body…a German teen can receive a Navajo lung…
Or an even simpler truth. Any male and female from anywhere on this globe can naturally give birth to a child without medical wizardry.

I personally believe we are close to the tipping point when a much greater percentage of the global population says… this is pure stupidity and we need to change it. Let’s try sharing love.
The second question… what keeps this madness fueled? I can give much of that answer, maybe all. All those labels and tags continuously attached to people only serve to separate, not unite. They destroy the truth of all is one. Just by use of those labels, one says they are not the same…so it instantly becomes us versus them. That even sounds antagonistic.
Shortly after the start of the recent incident at the Texas church, a news helicopter was circling overhead, with a live feed going out to FB. On the ground, I saw numerous police vehicles, a number of ambulances and a few fire trucks around. Of course, the reporter has a running commentary going, in spite of the fact that he has very few facts. But he keeps on with what he heard and it was said in a way to be somewhat volatile because that is what many viewers want. So we have some distorted facts thrown on to the fire.
Since this was also a live FB feed, anybody watching could make any comment they chose. A number chose this time to argue, not debate, the issue of gun control. Some were getting quite heated about this.
Those in favor of stricter gun regulation were saying if guns ownership was more strictly controlled such a person would not have had those guns. And then they cite other countries that have the strictest controls as having no gun involved crimes and very low overall crime rates. Guess what? These kinds of incidents happen there too.
The pro-gun side that believes it is their right to own fully automatic military rifles was saying if a couple people had guns with them fewer people would have died. Interesting thought. And just how many gun owners have spent hours shooting targets, especially with targets that shoot back? Perhaps More may have died. These individuals will also cite other countries where military training and gun ownership is mandatory…one may be the most militarized nation..as also having very low rates of gun crimes. Hmmm. What about the daily suicide bomb and missile attacks?
One of those live feed comments jumped out at me. “I bet his name was Mohammed.” More damned stereotypical tags. More fuel on that fire. What does a person’s name mean here? The name itself…nothing. But all knew what he was meaning…it must be a Muslim. I think it safe to say he never talked to a single Muslim. I have spoken to many…all very peaceful and reasonable. Willing to speak of our different beliefs in a  calm manner. The way it should be.
So many so quick to pass judgment without correct information. More fuel. When people make comments like that they are truly showing their ignorance. What would that person say if that shooter’s name was John Smith? A name with over 400 years of history in this country… Captain John Smith, the founder of the Jamestown, Virginia settlement.
If that commenter was a boxing fan he clearly forgot about Cassius Clay, who converted to the Muslim faith. He changed his name to Mohammed Ali, and he was a pacifist…except in the ring.
Can we please throw away all these divisive labels and share our love with the world. My favorite word is love. What’s yours?
Tim James
Tim James has had a number of life experiences that provide a broad base of knowledge.
Tim is a friend to all. He enjoys learning and helping others.