I love to share stories of stellar customer service and often use those stories in some of my bestselling books and in my articles.  Sadly, I have had a nightmare experience with AT & T.  Not only one of the worst examples of customer service (lack thereof) also a tale of lies and being treated as if they could not care about me as a customer at all. 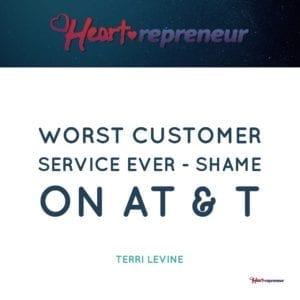 What happened?  I went to buy an iPhone X (I had always bought my iPhones direct from Apple and always will in the future). With the iPhone X, they gave me a “free” iPhone 8 that I gave to my husband. I was told how their insurance was “so much better” than Apple Care (which I have always had on all my phones, computers and tablets), and I got the insurance with my phones.

They didn’t have the iPhone X in stock and I waited about 3 weeks to get it from Apple.

The day I got it, I went to the store and they were attempting to set up my new phone when the screen went black.

They told me to “take it home and plug it in”, “sometimes we have this glitch”.  Sure seemed odd to me, having owned 9 of these before and having 6 others in my current plan.

I went home. I plugged it in.  Itunes would not recognize it. The phone would not turn on.  I did a hard reset.  Black screen.  Clearly, the phone is dead.

I called the store and they told me they had a phone that had been returned that they could give me. I said no to a returned phone. I was spending over $1,000 for a phone, why would I want a returned phone?

Then I was told the sales associate was picking one up from another store and 2 were also coming in that day.

My husband returned to AT & T to get my phone. He was spoken to rudely and told no one went to pick up the phone and they didn’t get phones in and “just go to Apple”.  Meanwhile, AT & T had been paid over $1,000 for this phone.

I go back in that night after the salesperson says he personally got me a phone and dropped it off at the store.

I waited 90 minutes being told only this ONE person could help me.

The one person finally came over, had a phone in his hand and said it was returned but is shrink wrapped and brand new.  I inspected it and said ok.

He said to give him 10 minutes.

After 90 more minutes, I said I had enough and wanted a refund.

He told me he was the store manager and that Maurice had pretended to be and was not.

I went to Apple and got a new phone and had to pay Philadelphia sales tax which is very high.

I have been lied to over and over and they gave me this person who they said was the regional manager who could help, so far no response.

I tweeted them last week, no response.

I will NEVER endorse AT & T and never buy anything they have to sell – ever.

Clearly telling lies is acceptable, caring about customers is no important and being rude is accepted.

AT & T you win the number one award for having no clue about customer service.

You should be ashamed.

Who else has had a bad experience with AT & T?