If you are not using print advertising, you are missing out on an advertising strategy that still works and is more cost-effective than just paying for social media ads.

Print Advertising is a tactic that has been around for decades. While the world of advertising is constantly changing, print advertising is still a powerful and effective way to get your message out and acquire new client family members.

In this episode, Teri talks about insert ads and how you can leverage them to increase your response rate and get more client family members!

Key Highlights From The Episode:

[1:44] Tips for writing advertising press releases for the media

[1:58] #1 Ensure that the press release follows The Conversion Equation

of human interest to your community

[2:28] #3 Personally send the press release to any media you think is interested in human

interest. Don’t fax them, and don’t attach it as an email.

[3:35] #4 Ensure that your press release says something newsworthy

[5:27] Writing articles for the press

[5:38] Inviting reporters to your events

[6:33] Terri Levine’s final words and how to connect with her

Let me help you grow your coaching business:

Grab this free training and see my revolutionary process in action! Join me and my Inner Circle Students for a behind-the-scenes Live Group Coaching Call: www.6figsin6months.com

If you want to join me in one of our connect and collaborate sessions. Go to https://calendly.com/heartrepreneur/mcm-live-connect-and-collaborate-session, and select a date & time! 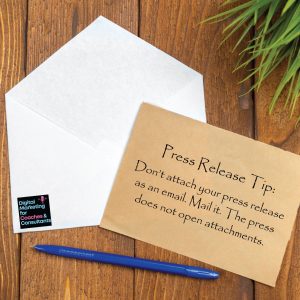 Watch all the episodes and more to gain more insight on Youtube: https://www.youtube.com/@coachterri/videos

Please connect with me on social:

Hello, welcome to The Modern Coaching Method Podcast. I’m Dr. Terri Levine here with you, helping you with these quick tips to really improve your coaching and consulting business. Today, I’m going to talk to you about how to get free advertising, and that’s often called public relations. So, just when I say free advertising, normally, people get a big smile on their face because who wouldn’t like to advertise for free? So, what is this free advertising? Well, it’s PR. It’s public relations. It’s press releases. In essence, any kind of media gives you free publicity, except most people don’t use it.

Free publicity in newspapers, even television, and radio. Why? When you go to the press and you present to the press something that is really newsworthy, then they are willing to publish that because it is something that their readers would be interested about. Now, the most common form of PR that most business owners are familiar with are press releases. You’re probably familiar with a press release. Most companies use press releases, and it’s very popular. So, let me just start there, I’m going to give you more tips that are even better than that. Press release is really simple. Go to Google, just Google press release templates, follow that.

Just make sure that that press release follows the conversion equation. 70 to 80% should be one-syllable words, easy enough that a fifth grader can understand it. And the press release should follow the templates. Keep the layout really simple, easy to read. And remember, it’s not an ad, it is something of human interest to your community. So, I want you to think about a press release more as a human interest story that the press will see as something that their readers will get value from. When you have a press release, I personally send it to magazines, newspapers, publications, radio, and television, and any media that I can think of that is interested in human interest. That’s what I do.

Now, I know a lot of people use services like PR Newswire, etc., which is fine. Also, I just Google the local newspapers, or if I want to do national, then on ABC, NBC, CBS, MSNBC, blah, blah, blah. How did I do that? I didn’t use companies to do that. I didn’t use PR Newswire. I went online, I found who the person was the editor responsible for the section I thought I would appear in, and I got my press release sent off to them. Don’t fax them. In the old days, people faxed them, people don’t do faxes. Don’t attach a press release as an email, the Press does not open attachments. So, I actually mail them, I use snail mail and they get opened.

So, what do you say in a press release? You say something that is newsworthy. You can talk about a common trend. You can talk about a deal. You can tell a story, a human interest story about a client that you’ve had, there’s plenty to write about. So, just as an example, with all these horrific school shootings, I have written press releases, pardon me, on how if we had coaching for children starting at early ages, we could actually teach children to cope better. That’s when I was doing life coaching. I also want you to think about news that deals with your business, or your industry, or something newsworthy.

Maybe you’re giving away free screenings, you’re an audiologist doing free hearing screenings. Or, you’re a health coach doing free nutritional screenings. Or, you’re using a new technique in your coaching or consulting business. Or, it’s the grand opening of your business or it’s an anniversary celebration. I covered anniversaries in an earlier segment, make sure you subscribed. Maybe it’s a community program you’re sponsoring. A kid’s day. Heartrepeneur has sponsored a day where we fed our community. That made the news because I did a press release about that. Maybe you have conducted some kind of a interesting survey. Maybe your company received an award or recognition.

Just be creative, you can actually come up with this. And you can also write about anything that deals with your industry. I could write about what’s happening in the coaching and consulting industry. And if there’s a major study, I can also talk about the major study. Major studies that are published are very interesting to the press. Then just make sure that you actually include the links to the study. The other thing that I love to do is not a press release, and I do more of this, I write articles for the press. I look at what the current trends are, what kind of topics the press is interested in, and then, I send that as a press release.

Let me tell you one of my other little secrets here. I invite reporters to my events. Whenever I’m giving seminars, workshops, retreats, having an open house, I actually invite the press. I have had the press cover my events numerous times and feature them in their publications. I have also — this is a really good one — sponsored an event in conjunction with a media company. So, I have gone to a media company, we’ve done an event, we’ve done fundraisers, and then, guess what? I still write about it. Now, maybe the press will, I just don’t know that. So, when I team up with a local media company to sponsor the event, to sponsor a fundraiser or something like that, the media company, I know, is going to give the event a heck of a lot of publicity.

All right. I know this was a little longer than our usual podcast here. Make sure that you have watched the three episodes mapping out your coaching journey. Go back and watch those if you haven’t, they are critical so you understand how to map out your coaching business. I am truly here to help you. Go watch ‘Six Figs In Six Months.’ The link is here. Why? After you watch that, or as you’re watching that, you can even ask me questions as you’re watching and I will directly respond to you. Truly here to help you. Let me know if there’s anything that I can do for you. And be sure also to join our Facebook group which is Heartrepeneur with Terri Levine. See you next time. Bye now.