We all know what it means, don’t we??

It means change, to reform or re-shape.
Yup, it does mean that, but is it actually more than that?
So many of us get lazy with our words…I’m including myself…at times. We accept and understand a word to have a certain definition because that’s how we hear it used. But we need to be careful or we may be totally missing a word. An astute listener may call us out on it…not good to happen in the middle of a lecture or seminar. It could totally change the message you were attempting to convey. Hopefully, it’s not so far of that they start laughing at you.
I’ll give you an example of that, then get back to the word above. I should do this blind and not give you the answer.  Well, I will ask the question here and give you the answer later.
Answer me this…no checking online or looking in Webster’s; what is a shambles? 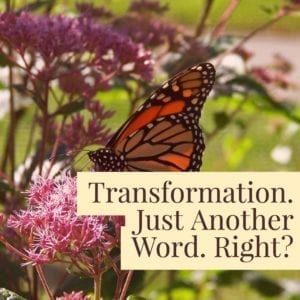 Now, what is included in the word… transformation? First, what does the prefix “trans-” mean? No checking! Think about it for a minute. I am using a Webster’s Collegiate edition…not the best, but it does give the etymology.  So, that prefix originally meant…across or over. How’s does that connect to form or formation? We know form or formation is a shape as a noun, and to shape as a verb.
We have two different inflections we can take from the two original meanings.
I’ll start with over. Since it is the prefix it becomes over form. Doesn’t sound right? Okay, small steps..sorry not meaning to be sarcastic, but my mind does not follow the “normal” patterns. So let’s turn it around…form over.
To form over would be to re-shape the thing or person.
The original thing will have a new shape, will not look the same when the forming over is done. Like rehabbing a building. The whole building is not destroyed. Some parts are taken away as not being for the new look in someone’s plans. But some of it stays. When the rehab is done, there should be a totally different look.
Now back to over form. What does over mean? On top of, above, superior. If something is over formed it is added on to, it is made superior..literally or figuratively. It could be as if one took a cube and added on to it, on all sides so that it is no longer a cube.
A point to remember, a transformation of anything does not mean it is good. The definition is a reforming or reshaping…good, bad, better, worse..none of those are part of the definition, yet we all..me too..think of it as always positive. Hopefully, it is.
Wondering about the word across, aren’t you? Still thinking about shambles too? That’s for the end.
Across…across from. What are you my friends reading this? What do you have in common? You are Heart-repreneurs.
You all took a risk setting up your own business. You made a leap…a leap across a gap of uncertainty. In doing that you had to shape yourself into a new form.  That leap across has become a part of your re-formed, transformed self.
Any of the changes one makes, should be well thought out and planned. If you have done that it will be a positive transformation.
Some say, well everything evolves and changes. True. But have you looked up the definition of evolve? It is a gradual change over a period of time, and it is implied to be a tacit, natural change. It is not active; it is passive. A transformation is an active process with an implied much shorter time-frame. Look at Darwin’s Theory of evolution (I won’t go there). It took untold millennia for that process to happen on its own. Do you really want to sit and wait for thousands of years and hope the change you want happens?
Oh, you want to know about shambles. A shambles is a big mess, right? Haha. This will surprise you. In the King James Bible, there is a verse in the Greek Scriptures, commonly called the New Testament, that says… Whatever you buy in a shambles, eat.  Wait a minute, whatever you buy in a huge mess eat?  Words can be so interesting.
Shambles originally meant a bench for displaying meat for sale. In the time of King James, it came to have the meaning of meat market. From there it became a name for a slaughterhouse. Its next iteration is a scene of great slaughter, carnage, and bloodshed. Then we come to a scene of destruction and disorder. So now we only apply the disorder to the word shambles, albeit, not truly accurate.
Tim James
Tim James has had a number of life experiences that provide a broad base of knowledge.
Tim is a friend to all. He enjoys learning and helping others.

previous
Are You Building Your Heart-repreneur® Ecosystem?
next
Get Over It and Just Do It, How to Beat Procrastination